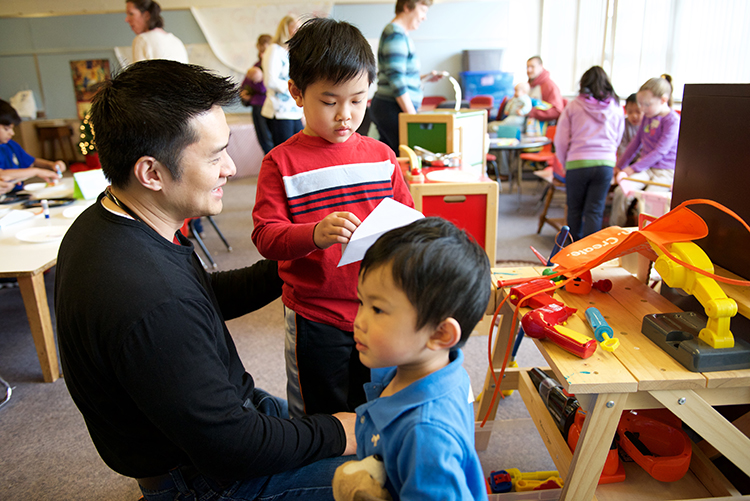 This spring, more than 50 Catholic schools in the Archdiocese of St. Paul and Minneapolis will launch a new Early Catholic Family Life (ECFL) program. The program connects parents with their peers, facilitates parent-child interaction and teaches parents about child development. ECFL is set in the context of the Catholic faith, which believes parents are a child’s first and most important teachers. The sessions are meant to serve parents with children ages 5 and younger and are especially impactful for new parents.

Founder Joanne Foley was a parent educator and teacher with Early Childhood Family Education, a Minneapolis Public Schools program that works with parents and their children. While discussing with her husband, Alan, the need for more faith formation opportunities between baptism and first Communion, she sought to offer an ECFE-inspired class, but with an added spiritual component. The result was Early Catholic Family Life (ECFL) in 2000.

Paul Campion, a parent of two sons at St. Peter in Richfield, recently completed the program. He talked about how important the parent breakout portion of the session was for him.

“We’re all trying to bring our faith to our children. You discover things as you share with others,” he said. “For instance, we would all share about what our parents did that touched and inspired us. As parents, we have a great responsibility in how to choose to live, which can really impact our children.”

During the first hour of the two-hour session, the parents and children play together. Then, they separate for parent discussion and child-only play time. While the parents share their experiences and advice, the children participate in age-appropriate activities, such as acting out the Mass, learning about the Nativity and singing faith-based songs.

The learning doesn’t stop once the session ends, however. Campion mentioned how his family completed “homework” every week, which helped his children build on the skills they learned at ECFL. This homework could range from spending more intentional time praying as a family to reading children’s books before bedtime.

Since its start, ECFL has grown from three pilot projects to numerous Catholic schools and churches in the archdiocese and beyond. The Foleys have trained ECFL facilitators in approximately 70 archdiocesan parishes and schools and in other Minnesota dioceses.

Joanne Foley said she’s edified by feedback from parishes that have completed the program over the past year.

“It’s really the Lord’s work that they seek and see benefits of ECFL,” she said. “That’s what has really been rewarding.”

To sign up for Early Catholic Family Life, visit earlycatholicfamilylife.org.