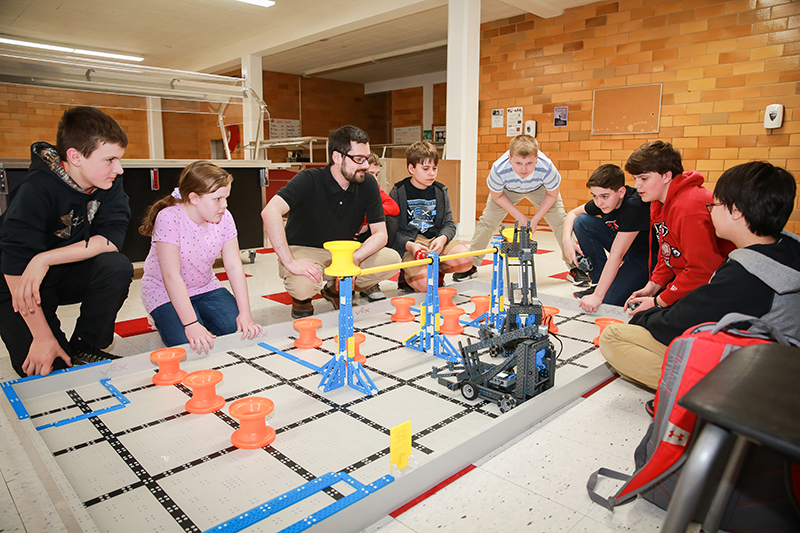 “So, do you guys have robotics?”

That question from an out-of-state transfer student to Divine Mercy Catholic School in Faribault sparked enough interest for the school to secure a $5,000 grant from the Catholic Schools Center of Excellence for robotics equipment and to join the VEX Robotics league.

In VEX Robotics competitions, schools compete as pairs for a combined score. Teams need a well-designed robot and a skilled operator. They must play to the other team’s strengths, requiring engineering and programming skills, along with communication and teamwork.

They also need perseverance. After a rough first competition, the middle school team re-engineered and rebuilt its robot.

“My students have taken personal responsibility for this, digging in, analyzing and solving problems,” said technology teacher Matthew Robinson. “That’s the character component of Catholic education — we don’t just teach students to do something, but to do it well.”

Sixth graders Peter Schoolmeesters and Zander Smith are the middle school co-captains. When asked about this year, they responded together: “Engineering was the biggest thing we learned — some of us knew some things about robotics, but most knew little.”

“All of us believing in Jesus does help,” they continued. “We bond better, which helps us communicate better, in turn, and lets us be more comfortable to share ideas.”

The redesigned robot catapulted them into the state tournament, and one of the elementary teams received a wild card berth.

“At state, our middle school team was knocking out consistently high scores all day,” Robinson said. “Teamed with St. Francis of the Lakes in the finals, we earned a higher score than anyone thought possible.”

The state co-champions participated in the VEX Robotics World Championship in Kentucky at the end of April — an incredible experience for a first-year team and a great foundation for the future. But it’s not just the robotics team that’s benefiting. Divine Mercy is leveraging its equipment and experience to help other students learn about robotics, programming, 3D printing and more as part of the school’s science, technology, engineering and mathematics (STEM) curriculum.