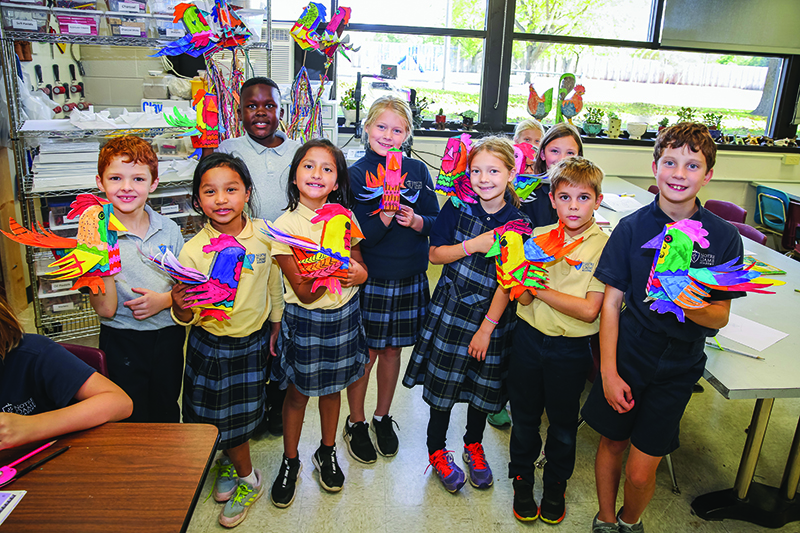 Clay turtles and whistles line art teacher Bill Kobe’s classroom shelves and windowsills. His third grade students stand on chairs, concentrating on their Dia de los Muertos roosters and adorning them with bells, beads and colored strings. Off to the side of his classroom, a rack of mugs waits to be fired in his top-of-the-line kiln.

Kobe’s dynamic materials and tools set his art class apart, but his carefully planned lessons — centered on culture, history and student individuality — truly bring art to life at Notre Dame Academy in Minnetonka. They have incorporated their family ancestry into Native American- inspired medicine wheels, constructed cars as a metaphor that a creative brain can get them far in life and made 3D mice that became characters to fill in a story of their own making.

Constructing and sculpting with clay is a student favorite. “It took a lot of steps, but we kept trying, and it took courage,” said third grade student Noah Johnson.

Kobe builds his students’ confidence and courage by sending their work into the community. Last summer, he entered 20 student projects into the Minnesota State Fair. Ten students earned ribbons, including one grand prize winner who also received an offer to buy the piece.

“I want them to know they were born to be artists, musicians, athletes or whatever they choose. They just need someone to nurture and encourage them, to help them to succeed,” Kobe said.

Having taught art for 23 years, he values how Catholic education feeds all the senses, allowing him to create traditions around Catholic feasts. For Dia de los Muertos, students tied remembrance tags to 3D roosters they created with the names of friends, family and pets who have passed away. With an increasingly diverse enrollment, Kobe uses multicultural projects to help all students feel welcome.

Notre Dame Academy’s Principal, Ginger Vance, feels blessed to have a teacher the caliber of Kobe.

“He has brought our elementary and middle school program to a higher level,” she said.