Click here to see how we are supporting Catholic schools during COVID-19. 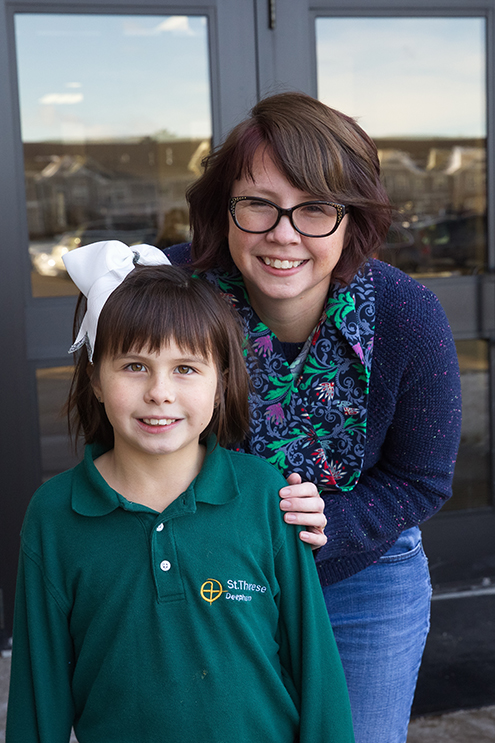 A School to Call Home

CATHOLIC SCHOOLS HAVE WELCOMED BOTH MOTHER AND DAUGHTER

Years ago, Lisa Schade Niewind and her daughter, Keyah, were getting ice cream after school when Keyah caught sight of three girls entering the shop. A preschooler at the time, Keyah excitedly told her mom that the girls, still clad in their Catholic school uniforms, went to her school and that she, too, would wear that uniform soon.

Niewind’s daughter had been just 3 years old when life threw them a curveball. Suddenly on a single income, Niewind couldn’t afford the preschool Keyah attended. A friend referred her to St. John the Baptist in Excelsior, where they were accepted regardless of their circumstance.

“We both needed the love the staff provided,” Niewind said. “They invested and nurtured me as a parent and helped my daughter gain back some of her confidence. We were welcomed every day with open arms.”

Keyah hoped to continue on to kindergarten at St. John the Baptist the following year, but Niewind was considering the public school. She wasn’t Catholic and was trying to make ends meet.

“They invested and nurtured me as a parent and helped my daughter gain back some of her confidence. We were welcomed every day with open arms.”

But the experience at the ice cream shop changed her mind.

The older girls had recognized Keyah and came over to talk to her. Niewind recalled that Keyah was overwhelmed with pride, and that she was so touched by the girls’ kindness to her daughter that she recommitted to attend St. John’s.

“When she started kindergarten, I was blown away,” Niewind said. “Her days were filled with love and stability, kindness and hugs. We felt very at home in our little school.”

Keyah’s kindergarten class was small, which meant that she received individual attention tailored to her needs. It also helped Niewind feel comfortable getting involved and meeting other parents. But she was still concerned about paying for Keyah’s tuition.

She remembers the day she typed the long email explaining her situation. After sending the email to the school, she couldn’t help but wonder if their new school would turn them away like the last one had.

“What I didn’t expect was to have them invest so much in my future, too.”

But the following Monday morning, they were met with hugs and support. The school understood their situation and provided them with a financial aid plan that met their needs. Since then, Niewind has encouraged other parents to pursue a Catholic school education, citing the school’s commitment to making Catholic education affordable to all.

Today, Keyah is a third-grader at St. Therese Catholic School in Deephaven, where Niewind says the teachers and school families are also warm and welcoming.

“You can walk down the hall, and everyone knows your name,” she said.

Keyah even received the sacraments of Reconciliation and First Communion as a second-grader.

“When you send your child to a Catholic school, you know that you’re investing in your child’s future,” she said. “What I didn’t expect was to have them invest so much in my future, too.”