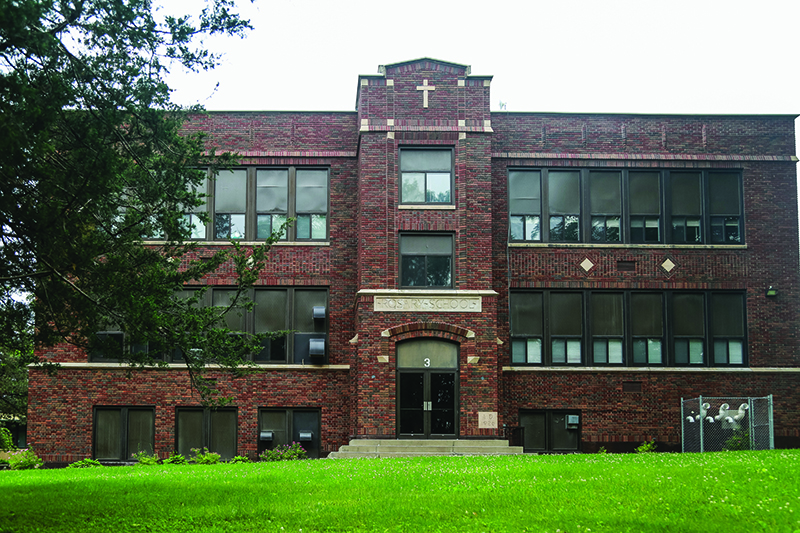 Understanding one another, creating meaningful bonds and serving others is at the core of the community at St. Dominic School in Northfield. Through an innovative, hands-on curriculum and service projects, the school aims to form confident and faith-filled young leaders. Those are just some of the reasons why April Cunningham sends all five of her children to St. Dominic, and why she thinks the school is so unique.

“I love that what they’re learning in school becomes real,” she said. “They get really cool chances to find out what they’re made of.”

St. Dominic’s new civics curriculum is one example of their experience-based approach. The curriculum helps students develop their own ideas and beliefs about government based on a program that simulates the transition from a dictatorship to a democracy with historical documents as guideposts.

Vicki Marvin, principal of the Northfield school, and multiple teachers worked alongside Bellevue University professors in Nebraska to bring the hands-on curriculum to the school. St. Dominic was among the first to pilot it during the 2018-2019 school year.

The students began the school year under “dictatorship rules,” where they had to stay after school if they slouched in their chairs, for example. Students could revolt against the dictatorship, make colonies with their own rules, explore how to get their classmates to join them, run parliament, and at the end, participate in a debate.

Cunningham loves how the program makes a typically dry subject come alive for her children. “My kids are really learning government,” she said.

Last school year, St. Dominic enrolled a new student in every grade, including preschool, and experienced an increase in middle school retention. Principal Marvin attributes the steady increase to the excitement around the school’s upcoming middle school expansion, the engaging civics curriculum and the new Believe and Read literacy program funded by the Catholic Schools Center of Excellence (CSCOE).

After 43 years of seventh and eighth grade students sharing time at Northfield Middle School, St. Dominic’s middle school expansion has been highly anticipated — especially because St. Dominic is the only faith-based school in Northfield.

“The middle school experience is crucial to student development because they are starting to create their own belief systems,” Principal Marvin explained.

“Middle school can be such a messy time, and I love being able to do those messy years in a school that knows and loves my kids,” said Cunningham, who has two children attending the middle school.

Students at all grade levels experience a hands-on approach. A professor from nearby St. Olaf College works with first grade students to develop a mobile app. Together, they learn to tweak the user experience. The school also partners with the city’s water treatment plant to study gray water and brainstorm opportunities for alternative uses.

In addition, St. Dominic is launching the Read and Believe program in partnership with Groves Academy this year, which follows the The Groves Literacy Framework™ to ensure all students are fluent readers and spellers by third grade. The three-year program uses weekly classroom coaching, monthly team meetings and other teacher support to help meet literacy goals.

Last winter, St. Dominic’s eighth grade students boarded a city bus in San Antonio, Texas, ready to embark on the mission trip they spent years working toward. From checking coats to bagging groceries, they worked diligently to fund the trip aimed at serving the marginalized in Texas.

Equipped with bus fares and journals, they taught third graders at an urban school about Minnesota, volunteered at a local homeless shelter and helped at an orphanage. Between service projects, the eighth graders learned how to use public transportation in an unfamiliar city and handed out care packages filled with soap and food to people facing homelessness.

Principal Marvin consistently hears how the mission trip positively impacts her students. “It’s an amazing experience for them,” she said. “They see that those in need are real people.”

Nearly nine percent of Northfield’s population is comprised of Hispanic and Latino residents. Traveling to San Antonio allows students to become immersed in Hispanic culture, helping foster an understanding of the background and life of their neighbors back at home.

“They return wanting to let the joy of Christ shine bright and live out Christ’s mission in their own community,” said middle school teacher Kelli Helgeson. “They bond as a class and feel a sense of fulfillment in knowing they have made an impact.”

In addition to the invaluable service projects and evolving curriculum, Cunningham noted the warmth of the teachers and their willingness to take on individualized learning initiatives. “Each teacher has actually loved my child,” Cunningham said.

Students like sixth grader Maggie Edel feel the same. “Every time I walk in the building, I feel like I walked into my second family. All the staff and students are all so nice, it’s really fun to hang out with everyone,” she said. “It is also really fun to make jokes and talk with the staff about anything and everything.”

Families feel like St. Dominic’s offers something different as soon as they enter the school because of the staff ’s willingness to embrace change like the new initiatives, Principal Marvin said. Second grade teacher Janet Sletten agrees. She has taught at St. Dominic’s for 41 years and once had Principal Marvin as a student.

“If you are a teacher, you need to be open to change,” she said. “This is not just a job, this is a calling. I love what I do.”

Cunningham has seen firsthand how capable and comfortable her children are with themselves in the classroom because of how the teachers adjust their teaching styles to fit each child’s needs.

“St. Dominic is outstanding in every way,” she said. “They’ve worked with me on little problems to big ones, and I always left feeling like it’s going to be okay. I feel so indebted to them.”